The 2nd Anniversary Party was a small party in CP3D. It celebrated the game's second anniversary. Only the Coffee Shop was decorated for this party. Aunt Arctic and Gary also made appearances during this party.

During the second anniversary livestream , the Dojo was struck by lightning, creating a hole in its roof. This eventually led to the Dig Out The Dojo event.

A poster for this party.

The Coffee Shop during this event. 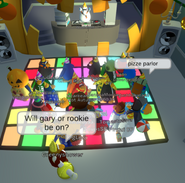