The island's water systems have been damaged, which is what led to the Water Party 2020. The player must repair them before any more damage is caused.

When a player who is part of the Penguin Secret Agency logs in for the first time between August 3 and September 5, they will be presented immediately with their Spy Phone ringing. When they answer it, Gary will tell the player to come to HQ. When they get there, the player talks to Gary, who gives the player instructions and information about their mission.

Afterwards, the player needs go to to the Pipeline, which is locked behind a door hidden behind the waterfall in the Welcome Room. They will then navigate through a series of pipes until they reach the Water Engine Room. When they do, they must repair the water systems by solving 3 different puzzles in under 5 minutes. When they succeed, the water systems return to an operational state.

Gary will call the player via the Spy Phone and inform them that they need to take one last look for clues before returning to HQ. The player then will navigate through the Pipeline until they find the mural of Richard, and a mission report written by Richard near it. The player will collect the report and return it to Gary.

Back in HQ, Gary tells the player that he will analyze the report and tell the player more about it very soon. When the mission ends, the player is awarded with the Exemplary Engineer Medal.

Gary, in the HQ, during the mission

The Water Engine Room, with the ERROR message on screen

The Water Engine Room, once the mission is complete

The Spy Phone, connecting to answer the call.

Gary telling the agent to head down to the HQ

A board in the HQ

Inside of the Pipeline

Some paper with Rory's signature, with the acronym "CPWS" for CP Water System

A painting of Richard on a wall in the water pipes, with some Beans, referencing the game Portal. 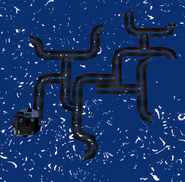 The Water Maze from top

A dead-end in the maze