The April Fools ARG is an event that took place on the official Discord server of CP3D on April 1, 2022. It was an event where members of the community worked together to solve four puzzles to form a password for the itch.io site. Ever since then, the site is occasionally updated with a new log from Gary the Gadget Guy along with some design changes to the site.

It started when SoupsSB shared an image in the announcements channel, joking about an upcoming party: The "Holiday Party 2: Electric Boogaloo (and Knuckles)". In the corner of the image, there was text in Tic-Tac-Toe code, which decoded to a link: https://cp3d.itch.io/database. The website acted as a database for the Penguin Secret Agency, containing the logo for the agency, some messages written in hexadecimal, and an input field to type something.

As the site updated with more submitted logs, the hexadecimal messages changed.

When it was first found

The password needed to be inputted in the field was an 8 digit number combination, in which 4 complex puzzles needed to be solved to get 2 numbers each. Each puzzle was composed by a different staff member: Kwakuyaa, SoupsSB, OlieGamerTV, and Domohead.

Kwakuyaa's puzzle started with a GIF being posted on his twitter, which contained the letter 'X' on the left side, and a clock. The clock would shift to two images: An hourglass, and a stamp. This implied the phrase "time stamp". The time on the clock translated to 10:49, implying that it could be the timestamp of a video.

This video was found to be Tiny Virtual Avatar Adventure Episode 10, timestamped at 10:49 where a character mentions the number 24. So, the final number for the password was 24.
SoupsSB's puzzle started with a video posted on his Twitter, which had a hidden spectrogram in the audio. The spectrogram revealed a distorted image of Rookie with part of the Box Store, and the number '52'. So, the final number for this as part of the password was 52.

OlieGamerTV's puzzle was a complex decrypt and decode puzzle. It started with a tweet by him that contained a link to a Google Drive file, which contained two images, both of which appeared to be broken at first.
The tweet contained this description:

After you removed those strings, it would form a whole image, which would reveal 4 different strings.

"UZEROVWRUFIVEUWQ" and "UZEROlY" were the important ones, as they were encoded in Base64. Decoding them revealed the words "SEVENTY" and "SIX", which were the numbers you needed from the puzzle.
"THE SIZE OF THE CODE MATTERS IN THIS BASE" was a hint for the small "l" in one of the Base64 codes. Olie had a hint in his Discord status earlier when people were solving the puzzle, which read "WORDS_CAN_BE_NUMBERS", which was for the "ZERO", "FIVE" and "ZERO" parts to convert them back to numbers. So, the final number for the password was 76.

Domohead's puzzle started in his fan-made Discord server, 'CP3D Zone'. He tells everyone to look at the backgrounds in his catalog, which contained a cryptic message in wingdings. When translated, it said to look at the ninth page of the catalog. That page contained an image with Domohead's signature duck in the center, with a line of text at the bottom. This ended up being in Base64, which, when translated to standard text, reads "basetPin wPZ8Y0fz", which decodes to "Pastebin wPZ8Y0fz". This then turns into a link for a Pastebin file: https://pastebin.com/wPZ8Y0fz

The code at the end is an ID for an Imgur image, which contains some blocks of color with the caption "Focus on the corners...". This ended up being a QR code, which, when scanned, turned into "NUMBER THIRTEEN". So, the final number for the password was 13.

Once all of the pairs of numbers were known, all that was left was to figure out what order they went in to form the password. This was revealed through a sticker of a Spy Phone in the Discord server, which occasionally flashed a combination of 4 letters in Tic-Tac-Toe code, which translated to "KSOD". This references for the first letter of each of the staff members who composed the puzzles: Kwakuyaa, SoupsSB, OlieGamerTV, and Domohead. The meaning of this was to put the number pairs in the corresponding order of the puzzles from those staff members.

The first log, on April 1, was Gary giving a message confirming that an April Fools Party is coming, once the snow from the Holiday Party clears out. The hexadecimal message at the bottom reads, "Situation in development" twice.

On April 5, another log was submitted, saying that Rookie noted that boxes in the Box Dimension were wackier than normal. He said that research will be conducted on it soon.

On April 7, two more new logs were submitted, saying that since Rookie spends the most time in the Box Dimension, there is a high chance that his concerns are accurate. Another log that was released later stated that he has gotten equipment working in order to conduct experiments ASAP. This suggests that an April Fools Party could be starting in the next 1-2 days. When these logs were released, the screen changed as well. Gary's icon image would slightly glitch, the "UNDER CONTROL" text changed to "UNDER INVESTIGATION", and the hexadecimal message at the bottom changed to "Investigation in progress Investigation in progress".

On April 14, another log was submitted, with the database having lots of glitching effects. The log was simply stating the challenge of calculating mean values in a parallel dimension.

After this, there was an almost month-long break before any more logs were submitted, most likely because of CP3D's downtime during this time. However, another log was submitted on May 12, with Gary concluding that, for the most part, the Box Dimension should be safe. The hexadecimal read "ERROR" many times.

After almost another month, on June 9, a seventh log was submitted, saying that the fluctuations in the Box Dimension are increasing in frequency, which raises concerns about a supposed April Fools Party. This is puzzling, as April is already past, so an April Fools Party being hosted now would be deemed odd at this time.

The following list of people is everyone who helped in solving each of the puzzles, by their Discord usernames. 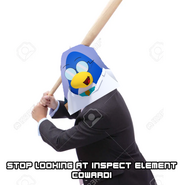 An image placed in inspect element to discourage cheating

Another image placed in inspect element on April 7 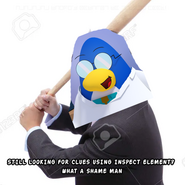 The PSA Phone sticker from April 7 and onwards
Community content is available under CC-BY-SA unless otherwise noted.
Advertisement