Astro Barrier is a minigame in CP3D. It can be accessed through the Astro Barrier arcade cabinet in the Dance Lounge. The goal of the game is to advance through every level by shooting all targets in each one. Removed in October 2019, it was updated and re-released as a reworked version on July 14, 2020. On November 8, 2020, 7 new levels were added to the game, which included the addition of portals, a new game mechanic

The game is played on the green screen of the Astro Barrier arcade machine. Only the keyboard is used to play, so the buttons featured on the machine are entirely cosmetic.

The game features a space ship on the bottom of the screen and a series of targets that move back and forth along rails. Each level has its own target layout, and a number of available shots, ranging from 3 to 10. Upon shooting all targets, the player moves to the next level. Consuming all shots without hitting all targets would cost the player a life, and the player would have to restart the level.

When a target is shot, it turns red and stops moving, unless there are multiple targets on the same line in which case, it turns orange and all the targets on the same line stop moving. It will be noted that some targets can only be aimed at through narrow gaps, making hitting them impossible if a target in front of them has been shot beforehand, which requires restarting the level in this case. In addition, the shots do not instantly hit the targets and take a brief moment to travel to hit, thereby requiring careful aiming and timing.

The game ends after successfully completing all 47 levels, or earlier if the player lost all lives.

For the stamps for this minigame, see Astro Barrier stamps.

Gameplay during the initial release. 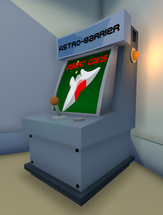 The Astro Barrier arcade cabinet located in the Dance Lounge
Community content is available under CC-BY-SA unless otherwise noted.
Advertisement