Card-Jitsu is a mini-game in CP3D. It can be played in the Dojo with another player.

To win a round, you must get 3 different colored cards of all the elements, or of a single element before your opponent does. Each element has a strength and weakness. Fire is weak to water, but strong against snow. Water is weak to snow, but strong against fire. Snow is weak to fire, strong against water. Whenever a player uses a stronger card against the opponent, they will get a card of the same color and element added to their score on their side of the screen. If two players use the same element, the card with the higher number is the one chosen to add to a player's score. If two players use the same element with the same number, a draw will happen resulting in another card having to be played by both players. There is a special type of card, called a Power Card. When played correctly, they could have effects such as reversing card priority, removing points from the opponent, or adding points to the player that played the card. These types of cards also have unique animations compared to the other cards.

As a player continues to play rounds, they will earn progress to earn different colored ninja belts. They can earn belts in the chronological order of:

Once a player earns the Black Ninja Belt, they have the possibility of defeating Sensei. If they succeed, they can earn the Ninja Mask, which will give them the title of a true ninja.

For the stamps for this minigame, see Card-Jitsu stamps. 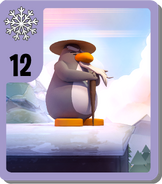 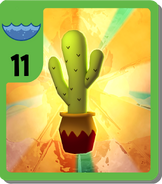 Club Penguin 3D- Card-Jitsu Trailer
An early build of the mini-game from 2017.

CP3D - Card Jitsu
The release trailer for the game
Community content is available under CC-BY-SA unless otherwise noted.
Advertisement