None
Color Vote 2020 was an event in CP3D. It was confirmed on the CP3D Official Discord server. It started on November 8, 2020. It was an event where penguins could vote for one of four new penguin colors to be added in-game. The colors were Cream, Forest Green, Mint, and Pastel Pink.

On November 22, the event ended, and Mint was declared the winner. It was later released in the Penguin Style Dec'20 catalog. 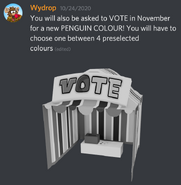 The announcement confirming the event, along with a sneak peek of the voting booth. 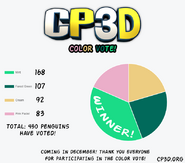 A chart displaying the voting results.
Community content is available under CC-BY-SA unless otherwise noted.
Advertisement