High in the mountains

The Dojo Courtyard is a room in CP3D. It is a secluded area high in the mountains, and it can be accessed either from the Mine Shack or with the Map.

It first became available on November 2nd, during Dig Out The Dojo, following the Halloween Party 2020. For a couple of weeks, players needed to dig out the room from which it was buried. During the first week It featured a large pile of snow on top of a mountain with part of a Torii Gate and Sakura tree showing.

Following the second week, the majority of the roof of the Dojo could be seen, and the hole that was created by lightning was patched. Two puffle statues could also be seen in the front, on each sides of the Torii.

During the Dojo's Grand Opening, the Dojo was almost fully dug out with just a small pile of snow blocking the entrance to the Ninja Hideout. This snow pile featured the three elemental symbols of Card-Jitsu. Following the Grand Opening, the snow was completely gone and the Ninja Hideout entrance is now visible. This is a large cuboid rock which slides down when a player approaches, revealing a door and a note saying that you must beat Sensei at Card-Jitsu in order to enter.

On March 10, 2021, smoke began rising from the volcano behind the dojo, which could be seen throughout the entire island. On April 11, 2021, the sky turned orange. On April 20, 2021, Sensei's Fire Scavenger Hunt started.

Dig Out The Dojo Phase 1

Dig Out The Dojo Phase 2

Dig Out The Dojo Phase 3

During the Holiday Party 2020

Penguins digging out the Courtyard on November 2nd. 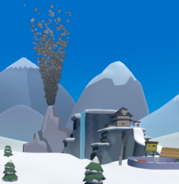 The smoke from the volcano.
Community content is available under CC-BY-SA unless otherwise noted.
Advertisement