Clicking on the smile face button on the Toolbar
Emoticons (also known as emotes) are faces and symbols used to express a penguin's emotions. They can be accessed from the Emote Menu on the Toolbar or by pressing "E" followed by a letter key on the keyboard.

On June 20, 2020, all of the emoticons in-game were replaced by redrawn versions of them by Tomastos1.

The emoticons panel during the Water Party 2020

The emoticons panel during the Festival of Flight

The emoticons panel during the Halloween Party 2020

The first sketch of the new CP3D emoticons

A Dark Green version of the smiling emoticon

A variant of the smiling emoticon, without the white part of the eyes 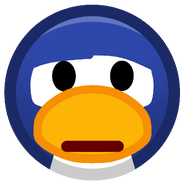 An unused emoticon, based on the :emote: emoji in the Discord server
Community content is available under CC-BY-SA unless otherwise noted.
Advertisement