Franky's First Show is a book in CP3D. It can be read in the Book Room.

The story takes place right before the Western Party, as Franky, one of the members of the Penguin Band, is about to play his first performance.

The book tells us that Franky had been asked by G Billy to become the fourth member of the band. Franky accepted immediately, without giving it much thought. However, when the day came a few weeks later to play the first performance, Franky is suddenly having stage freight and is very nervous that things will go wrong.

However, G Billy encourages Franky, telling him to not let fear stop him from playing and having fun. And so, Franky plays with confidence, and the four went on to play together.

Pictures in the book 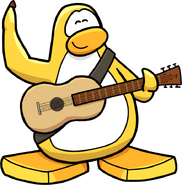 Add a photo to this gallery
Retrieved from "https://cp3d.fandom.com/wiki/Franky%27s_First_Show?oldid=12802"
Community content is available under CC-BY-SA unless otherwise noted.