Not the article you were looking for? Check the disambiguation page.

Pre-party decorations were added on October 15, 2021, which featured dark clouds in the background of all outdoor rooms, alongside posters in the Town, Beach, and Ski Village for Attack of the Evil Puffle and the Night of the Living Sled trilogy. On October 24, the party began. Several decorations were added throughout the island, and a dark night sky and storm covered the sky.

The most prominent new attraction in this party was Gariwald's Mansion, which could be accessed from the Forest and consisted of several rooms to explore. The Five Spooky-Keys Hunt was present in these rooms, where players needed to find 5 different keys in the different rooms of the mansion to unlock a treasure chest in the Foyer, in which the Ghost Goggles could be obtained from it when the hunt was completed. When it was obtained and worn by the player, a door in the back wall of the Foyer appeared, and when entered, players could access the Ghost Lab, where they could meet up with Gariwald VIII and be turned into a ghost via the Ghostamatron machine. This was the first time a transformation appeared in CP3D.

When a player became a ghost in the Ghost Lab, all items that they were currently wearing were automatically unequipped. The appearance of the ghost was similar to the normal penguin, however there was a slight transparent effect, and the feet of the penguin were not present. Rather than walk, they would hover above the ground. There was no dance animation, however, when a player waved as a ghost, they would grow bigger and scream with their hands open.

The poster at the Town for Night of the Living Sled.

The poster at the Town for Night of the Living Sled 2.

The poster at the Ski Village for Night of the Living Sled 3.

The poster at the Beach for Attack of the Evil Puffle.

The dark clouds seen across the majority of outdoor rooms.

The dark clouds as seen from the Iceberg.

Dark Chamber (with a lantern) 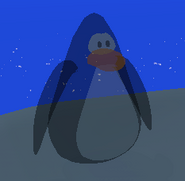 Example of a ghost transformation in-game.

The ghost transformation animation when waving. 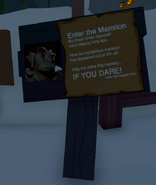 Teaser for the Haunted Mansion.