Ice Fishing is a minigame in CP3D that can be accessed by going through the door labeled "Gone Fishing" in the Ski Lodge. The goal is to guide a worm on a vertical plane and catch fish.

The player starts the game with 3 worms (counting the one on your line) and cannot gain more. They earn 10 coins for each fish reeled in, and 150 coins for the mullet.

As you catch more fish, the difficulty increases. The benchmarks at which difficulty will increase are as follows:

At 60 fish no more fish will spawn and the only ones you can collect are what remain on your screen. Getting to 60 fish also triggers the Mullet to spawn, and after crossing your screen in the background he will come towards your line. The only way to catch him is if you already have a fish on your line and you position it right in front of him. If you don't have a fish on your line, after getting close he will scurry away.

Barrel/Boot: Causes the player to drop any fish currently on their line. This does not affect the worm or hook.

Shark: Eats the worm if the worm is near its mouth. Removes both the worm and the hook.

Jellyfish: Shocks your line if it comes in contact with it. Removes only the worm.

Crab: Slowly moves towards your line, then after a few moments clips it if it's under the ice. Removes both the worm and the hook.

Can of Worms: Hover your hook over the can of worms to get another worm

Note: If your hook as also removed, you will get a new one when you click while your line is above the surface, along with a new worm.

For the stamps for this minigame, see Ice Fishing stamps. 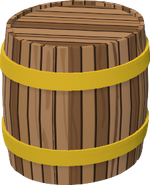 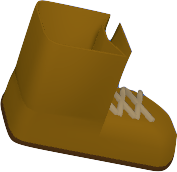 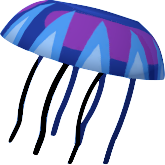 Can of worms, which acts as a 1-Up

The Pink Puffle that appears after each round, giving the player a warning about an obstacle

Gameplay during the Music Jam 2021
Community content is available under CC-BY-SA unless otherwise noted.
Advertisement