The Island Adventure Party 2021 was a party in CP3D. It started on August 22, 2021, and ended on September 9, 2021. Rockhopper visited during this party, and the Paper Boat Scavenger Hunt also took place during this party.

The entire party had a jungle/pirate theme to it. The island was decorated in lots of jungle plants, grassy terrain, and palm trees. Building exteriors were also decorated with the theme. During the second week of the party, the Tree Forts party room opened at the Forest.

Cove (once the player has completed the Paper Boat Scavenger Hunt)

The sign on the Tree Forts entrance during the first week of the party. 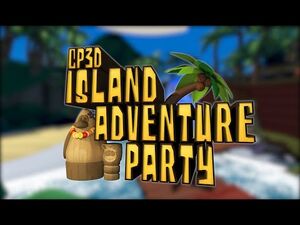