Behind the Recycling Plant

The Mysterious Labyrinth is a room in CP3D. It is a maze that contains multiple items to access the room and the things in it at the end of the maze.

Once a player has entered the labyrinth, they can get the Lantern by walking up to the lantern on the left side of the entrance.

To the right side of the labyrinth entrance one can optionally lift a cover to see a map which reveals the key to the maze. The map (as shown in the gallery) contains 5 landmarks, and in order from left to right, they are.

Once the player has seen and written down the codes on both pieces of paper, they can combine them to see the words: "computer access: 4917". This is the code used to log in to the computer in Richard's HQ.

After the player has gotten both the code and the R HQ Key, they can continue to the end of the maze and enter Richard's HQ, or R HQ. 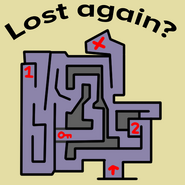