Be resourceful, be remarkable, be ready

The Penguin Secret Agency, more commonly known as the PSA, is CP3D's spy association that helps keep the island safe.

Opened on February 23, 2020, the PSA offers somewhat of a trial for determined penguins to become a member of their ranks. This trial involve a penguin venturing beyond roadblocks behind the Recycling Plant and through the cave in the rock wall entering the Mysterious Labyrinth. When in that labyrinth a player has to find a key, the exit, and two pieces of paper that, when put together, reveal an access code for logging on to Richard's computer in R HQ. After logging on to this computer The Director offers the penguin the option to become a member of the PSA by picking up the Spy Phone in the closet.

There are currently two locations for the PSA, the HQ and Richard's HQ. The HQ is the primary meeting place for the members of the PSA, and it includes an abundance of monitors showing security footage for each and every room on the island, and Gary the Gadget Guy's Gadget Room. Richard's HQ, or R HQ, contains a generator, a computer, a closet with a Spy Phone inside, and other random objects placed around the room. Unlike the main HQ, R HQ is solely for Richard and his missions.

While most members of the PSA are just random, anonymous penguins from around the island, there are a few notable members. These members include:

Currently, the only mission that has been released is A Welcoming Flood, which took place during the Water Party 2020. Players needed to repair the broken water system in the Water Engine Room. 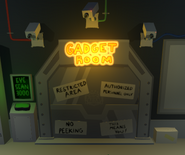 Entrance to the Gadget Room in the HQ