Inside the Mysterious Labyrinth

R HQ, also known as Richard's HQ, is a room in CP3D. This room is Richard's secret hideout, where he plans missions and communicates with the other secret agents such as The Director.

R HQ essentially acts as a branch of the HQ, having a very similar layout and performing similar functions. It was used as Richard's secret base of operations before he went missing.

Becoming a member of the PSA

If a player knows the password found in the Mysterious Labyrinth, they can press the red power button on the computer to the right side of the room to power it on. After it's on, they can access the computer by clicking the computer screen . Upon accessing it, they will be prompted to enter a passcode, which is the code found in the Labyrinth. If they input the code successfully they will be brought into a conversion with The Director. The Director will at first assume that the player is Richard, the missing agent, but will then realize that Richard is still gone and that the player is someone else. The Director will be impressed with your knowledge and skill with getting this far and will then offer you the option to become a member of the PSA. The player can accept by walking up to the now open closet in the center of the room and picking up the Spy Phone.

This room is loaded with easter eggs and references. The hoodie against the left wall is the old model of the 10k Hoodie, the hoodie given away during the 10k Celebration. The crates in the back-left corner of the room with the label "CORN" are used as fuel for the generator that powers R HQ. This is a reference to the 11th and final PSA mission: "The Veggie Villain" in the original Club Penguin, where Herbert uses corn for a variety of things, including using it as fuel. On top of the corn crates lies the Beta Party Hat, the party hat given to all players who played the game during its final beta testing. In the front-right corner of the room lies a workbench very similar to that of Gary the Gadget Guy in Club Penguin' PSA HQ. The blueprints lying around that workbench are representative of Gary's blueprints for some of his original inventions, such as the AC 3000. The objects on the shelf above that workbench are also some of Gary's inventions. Finally, in the box below that shelf lies a penguin figure, a reference to the demo Experimental Penguins, the game made by RocketSnail that lead to multiple other games such as Penguin Chat being released, and eventually lead to the release of 'Club Penguin'. 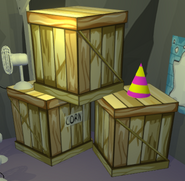 Corn crates with a Beta Party Hat on top

The computer used to join the PSA 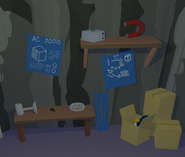 The workbench in reference to Gary's