Richard, also known as Agent R, is a non-meetable character in CP3D. He was created by the fans and was a secret agent before going missing. His color is old blue and he uses the original penguin model.

Richard was originally a placeholder penguin model unintentionally left in the Mine Shack, near the Cave Entrance. He was given his name by fans in-game, and the name was popularized by videos made by alaviivamies44.

The placeholder penguin was removed in the update for the Halloween Party 2018. Due to fan response, Richard was added back into the game after the party ended, but with an invisible barrier preventing players from reaching him. Eventually, he was removed once more when the room was updated on May 6, 2019.

On May 6, 2019, Richard was removed from the Cave Entrance, and thus went missing. Since then there have been many attempts to find him and flyers around the island with his name on them. These include "WANTED ALIVE" posters with his face and name on them during the Western Party 2019, and a "Have you seen this penguin?" poster with only his face located in the Plaza.

Original appearance at the Cave Entrance 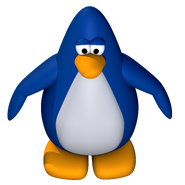 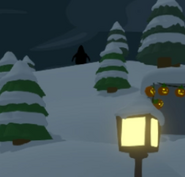 Shadow in Town during Halloween Party 2019

Decoration on the 1st Anniversary cake

The player who took Richard's name during the Western Party 2019