The F.I.S.H. (Factual Informative Spy Handbook) is the PSA handbook containing information on the PSA's history, it's methods, and also acting as a catalog to buy certain spy gear.

The first page of the F.I.S.H. details the duties of a spy. These duties include:

The second page gives reasons to report a penguin and goes into detail on those reasons.

The third page explains the confidentiality of being a secret agent, and under what conditions you would lose your status as an agent.

The fourth page shows the catalog of spy gear on the left side, which consists of the Black Sunglasses, Black Bowtie, and Black Suit, and the right side explains the special dances performed while wearing certain items such as the Hard Hat and Pizza Apron.

Page five goes in-depth on the features of the spy phone. It offers a diagram of the phone's features and where they are located on the phone.

The sixth page gives the key and explanation of the secret code, also known as the Tic-Tac-Toe Code. The Tic-Tac-Toe Code is a code made up with a 3x3 tic-tac-toe diagram, with the 26 letters of the english alphabet each taking a spot in the table from top-left to bottom right. After the normal table is filled the letters fill in a similar table but with X's in each space, and after that the letters fill in another table but with O's in each space.

The seventh and final page of the F.I.S.H. gives the profile of the secret agent Gary the Gadget Guy on the left, and shows a message from The Director on the right along with their signature, the only unused symbol in the Tic-Tac-Toe Code. 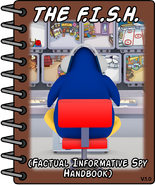 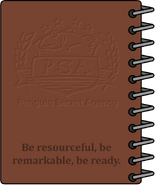 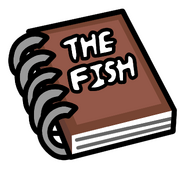 The icon for the catalog.
Community content is available under CC-BY-SA unless otherwise noted.
Advertisement